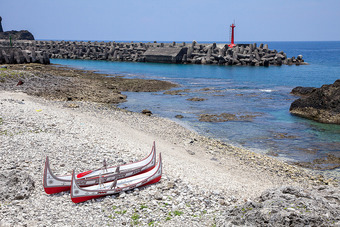 Taiwan discovered the first pre-historic culture is "Nagahama" culture which was between 50 thousand years and 15 thousand ago.
About 4,500 years ago the ancestors of current Taiwan Aborigines settled in Taiwan.  These aborigines are from the southern island of Taiwan, gentically related to those of the South Pacific Ocean and Malayan, their language is Austronesian.

In 1545 the Portuguese ship passes by Taiwan island and named it "Ilha Formosa", which means "Beautiful Island", that's how Taiwan was known as "Formosa" before.

In the 17th century, other than some Japanese, Han, Pirates coming in to Taiwa and European started to established their commercial activities around Taiwan region, the Dutch from their "Netherlands East India Company" in 1602 and was having business around these area and have conflict and competition with the Portuguese and Ming Government, the Dutch than move into Penghu, in 1624 China send their soldier to decal that Penghu belongs to China, the Dutch then move to occupied Taiwan, and establish their commercial base in Tainan, in 1662 the Naval and troop forces of Southern Fujian lead by Zheng Chen Gong defeated the Dutch and ends the 38 years Dutch colonized history.  Duing this period in 1626, the Spanish occupied the northern part of Taiwan the Keelung and Tamsui area and was defeated by the Portuguese in 1642.

Following the fall of Ming dynasty, Zheng ChengGong retreated to Taiwan as a self-styled Ming loyalist and established his Kingdom in Taiwan, Zheng passed away not long after he defeated the Portugese, his son and gland son Zheng Jin and Zheng Keshuang contnue to rule the country from 1662 to 1682.

In 1683, Qing Dynasty has taken over Taiwan, Qing dynasty formally annexed Taiwan till 1895 in control of 212 years.

1874, Japanese using the excuse of people being killed by the Taiwanese in Ryukyu then send troops to Pingtung, later after peace talk the Japanese withdraw.

1884, because of Vietnam's sovereignty matter Qing fought again France.  The French instead attack Keelung and Tamsui but wasn't successful, then the French turn and took over Penghu at the same time take control of the sea rights.  The following year Qing's realise the important of Taiwan and made Taiwan as its own Province - Taiwan Province from then.

1894, Qing was defeated in the "Sino-Japanese" war (甲午戰爭）， in 17th April 1895 Qing ceded Taiwan and the Penghu to Japan in perpetuity in the Treaty of Shimonoseki （馬關條約）。

On 25th May 1895, a group of pro-Qing high officials proclaimed the "Republic of Taiwan" amde Tang Jing Song as President, but the life of the Republic was lasated for 148 days.

The Japanese were instrumental in industrialisation of the island, they extended the railroads and other transportation networks, built extensive sanitation system and revised the public school system and should said that by then Japan has good control over Taiwan.

Around 1935 the Japanese began an island wide assimilation project try to reform the Taiwanese.

In 1937, Sino-Japan war broke out, the plan of assimilation project then work well, in 1941 the then "Pacific War", the Japanese was able to recruit about tens of thousands of Taiwanese to fought the then "Great Easat Asia Holy War" and the death toll of Taiwanese soldiers was about 30 over thousand.

Japan's rule of Taiwan for 50 years ended when it lost World War II and signed the instrument of Surrender of Janpan on 15th August 1945.  But the Japanese occpation had long lasting effects of Taiwan.

When the Kuomintang(KMT) took over Taiwan, many who fought against China and the allies for the Japanese war machine reluctantly accept the Chinese arrivals, and due to military administration, unsound government polices, corruption plus the diiference in culture and linguistic between the Taiwanese and the Main land Chinese, quickly lead to loss of support from the people of Taiwan.  With all these problems there was a severe clashes between the KMT government and Taiwanese,  the unforgotten incident was the bloody "228" incident and the reign of "White Terror", to commemorate this incident every 28th February is a public holiday in Taiwan.

After the surrender of the Japanese in the War World II, there was Chinese Civil War in the mainland of China.  21st January 1949, Kuomintang (KMT) knows that the situation wasn't favorable to KNT in mainland China, so Chiang Kai-shek led the KNT retreat to Taiwan.  20th May Taiwan declare Martial Law.
Than in 10th October Chiang Kai-shek announce establish of Republic of China (ROC), 7th December move the governor to Taipei.  On 1st March 1950, Chiang Kai-shek took over as presisent of ROC.

During the 1950 Korean War, US assist Taiwan in the area of defense and military and economic support that made Taiwan go through the difficult situation.  The government than introduce the "controlled free market" economic policy, and gradually loosen control over the free market economic, with this it has given the people opportunity to start their private enterprise, from here it become the driving force for Taiwan economic advancement.

1965, the government set up Kaohsiung "export  processing zone" had given the economic advancement another push, with a strong and dynamic economy, Taiwan became one of the Four Aisa Tiger in the 80's.

19th November 1977, the people first time on street demonstration again the government, known as "Chongli" incident.
1st January 1979, since the US established diplomatic relations with PRC, the ROC severed diplomatic with the US.

Durig the 70's with the economic progress and advancement, has led to the rise of the middle class to demands for political reform, it was known and underground movemnet.

In 10th December 1979, the "Meili Island" (the present Green island) incident has almost causes the collapse of democracy movement which was built for 10 years.

28th September 1986, the Democratic Progressive Party (DPP) was formed and inaugurated as the first opposition party in Taiwan to counter the KMT.

13th January 1988 the death of Chiang Ching-Kuo his successor Lee Teng-Hui took over the office and become the 1st natie Taiwanese President and democratize the government.

In the 90's, Taiwan transformed into the true democratic state, as President Lee Teng-Hui was elected by the first popular vote held in Taiwan during 1996 presidential elections.

In year 2000, Chen Shui-Bian of the DPP, was elected as the first non-KMT President and was re-elected to serve his second and last term since 2004.

In Year 2008, the KMT turn the Green to Blue, Mr. Ma Ying-Jeou was elected as President of ROC and was re-elected to serve his second and last term since 2012.