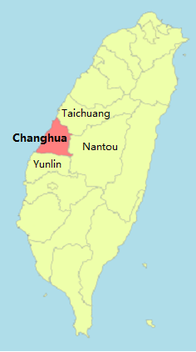 Lukang or Lugang (in Chinese Pinyin) and literally translate as 'deer harbour', is an urban township in Changhua County.

The township's name came from the port's trade of deerskins during the Dutch colonial period.
Lukang was Taiwan's second largest city after Tainan, but due to the subsequent silting of the barbour and the city refusal to allow railraods to pass throught that led to the decline of the city urbanization and losses their stands as second largest city in Taiwan, and leaving behind is the preserved as it was in its heyday.

So going to Lukang you will learn about the ancient Chinese traditions and old Taiwan culture, is like a 'living museum' or back to 'those were the day's' kind of feeling.
You see heritage buildings, interesting streets, gorgeous temples, colorgul handicrafts made by the equally old masters all around the city and traditional food is what you should not miss too.

Places to go in Lukang

Lukang Tianhou Temple is one of the oldest and finest temple in Taiwan, was built in the end of Ming Dynasty and beginning of Qing Dynasty and dedicated to Matzu, the goddess of the sea, who is said to protect firshermen and sailors.

Followers of Lukang Tianhou Temple is numerous and all over Taiwan, therefore, in every first to third month of lunar calendar, followers come from everywhere of Taiwan are here to celebrate Mazu's birthday and is definitely crowded with people.

Other than the followers there are many visitors all over the world are here to appreciated this temple or historical site because of her collection detailed stone sculptures and elaborate wood decorations, such as the dragon pillars, beautiful stone carving from Qing Dynasty, Eight Trigrams (Bagua) doors and many other dedicated works by the academic circles of Taiwan. 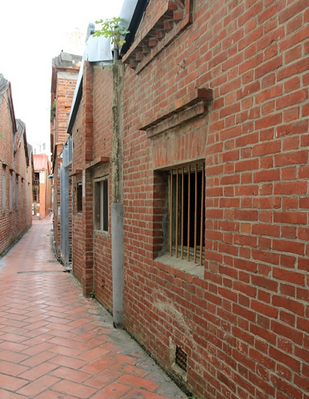 With extensive traditional snacks and well-preserved architectures and cultures, the past is revealed authentically in the Lukang old street.

Houses at the old streets are in taditional Taiwanese style with carved doorways and windows, the red bricks wall, red tiled narrow street and winding alleys, most of these hourses are privately owned, therefore, is alright for the owner to used their resident to run their home business, while some will renovate it and preserved as a reminder of the past heritage.

The old streets is good for photo enthusiasts and of course food is another highlight, a wide array of seafood and old-time flavours, come and taste it yourself and you will love it.

Oh, yes! There are also lots of traditional stores, shops and stalls feature an extensive range of handicrafts, antique toys, paper lanterns for visitor who fancy things of the olden days are able to find them here. 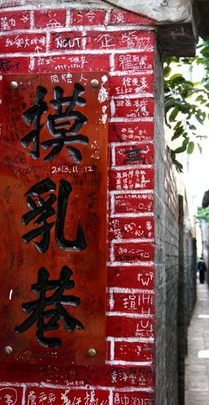 it sounds awkward or funny right? It also known as 'Gentlemen' lane or 'Protect your breasat' lane..., what ever it may be, it all depend on what is in your mind.

It is an alley with 100cm wide and with less than 70cm at the narrowest point, is the narrowest alley in Taiwan, and would not be wide enough for two persons to pass, if two persons insist of passing through at the same time, their chest would be in contact with each other, hence the name.  The other saying is that in the olden days Chinese only want their wife to give birth to baby boy, with this thinking in mind make them oftern dream about it over the long nights and like this narrow and dark street, therefore, the local name this lane as 'Mo-leng' (in Taiwan langue means dream to have a baby boy 夢麟）Street, when time pass the Mo-leng sound like Mo-Nin (touching the breast摸奶）and later tranlate to Maderin it become Mo-Ru that how this name came from.
Be it in Taiwan lanuge or Madarin, Mo-Nin or Mo-Ru  is still sound awkward, the local than renamed it as 'Gentlemen' lane, because they realise that most of the man would always wait for a lady to pass through first, there is no way or never happan about the Mo-nin or Mo-ru situation.

But today is still name 'Mo-Ru' lane, why?  We shall leave it to you to explore it further.... 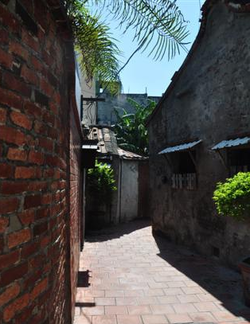 Don't bother to count the turns, it should be more than 9 turns, 9 for Chinese means many in the olden days.
Anyway, this lane is like the old street with houses by the side of the road except that it is not a stright road but with many truns, the reasons for building their houses along this winding lane is to reduce the strength of cold wind and sand blowing into their house, at the same time for defense purposes with the truns it help to prevent the entry of bandits. Try to walk in this maze like lane and see how you feel about it.

The Glass Temple, is devoted to Mazu, the widely worshipped Goddess of the Sea, is a copy of hisoric Tianhou Temple in Lugang Township, it not only provides a place where people can worship and is a showcase for Taiwan's glass industry, situated within the Changhua Coastal Industrial Park.

The temple is completely constructed out of glass, the furnishings and ornaments, including the shrine and statues are made of glass, except it steel frame.

Since it is transparent, it is wuite the sight to see the sun seeping through the glass temple at every angle and give its colorgul rays (ray of hopes) during the day.
When night fall, the temple you see multi-colored lights casting shadows on the glass creates a peaceful and serene effect against the darkness of the night.
It will be good you visit the temple before last light and stay till night fall, this way you get to experience the temple from both day and night perspectives. 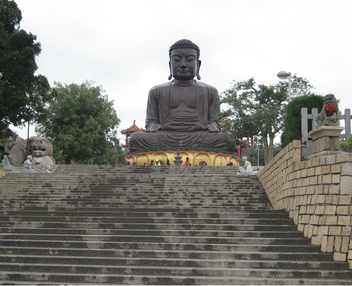 Changhua is the home of the famous Great Buddha Statue, the biggest in Taiwan.  An impressive sttue of Buddha towing 22 meter above its golden lotus-flower base, made of concrete painted in dark brown, sits on a hillside park overlooking the Changhua.

Once you arrive at the entrance gate of the Giant Buddha Scenic Area, the steps leading to the Buddha are accompanied by 32 stone Guanyin sculptures, athe the end of thsi frand avenue, you will come to the Nine-Dragon Pons, and inside the statue there is a total of 6 separate floors, there are worship hall, exhibits of Buddha's work during his life time.

Behind the Buddha there ar two 8 stories pagoda, with park surround the whole area, with all these it gives this area a sense of quietnes and tranquility and you will be able to feel the religious atmosphere too.